KAWS – Worth More Than His Weight in Gold. BUY NOW!? 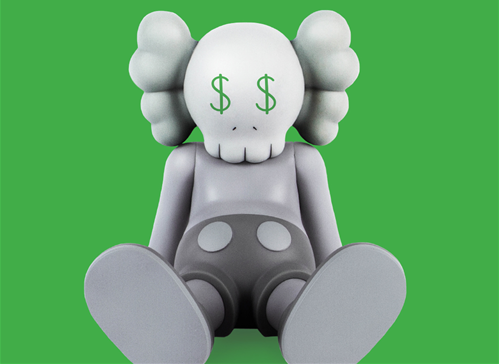 In late 2018 veritable art-as-objects-of-financial-capital website ArtNet launched their ‘Intelligence Report Project’ to track and critically investigate the art-market in much the same way as Business Insider investigates the financial market. With the ‘Intelligence Report’ being – per its promo, “A joint collaboration between ArtNet News and the ArtNet Price Database team, this is not your typical art-market report—it’s something new”.

In essence what the ‘Intelligence Report’ does is to look at art as a tradeable financial commodity just like shares. It removes any sense of culture from art, and instead focuses only on it as financial capital – An art guide for bankers and hedge-fund managers, as opposed to one for curators and art lovers.

It is the art world gone full neo-liberal.

Well for their Spring 2019 Intelligence Report, ArtNet have used a remixed image of a KAWS sculpture – with the iconic KAWS “X” eyes being replaced by Dollar Signs / “$” – as a promotional image. The image presents a KAWS figure with a skull head and aforementioned green dollar signs for eyes, resting against a green background. The green an obvious reference to money.

Now, taken out of its context as an advertisement, and viewed standalone; the promo-image could be read as a great piece of pop art criticism. Perfectly positing, attacking, and commenting on the status of art (and by extension art-toys) as objects of hype, investment, and speculation.

However, the image isn’t intended to be an attack at all. Indeed, it is instead meant to reinforce the KAWS figure – and by association all of KAWS work – as pieces of highly valuable monetary capital. The KAWS sculpture is not an object to ponder and gain meaning from. It is instead an object of investment.

And ArtNet will tell you all about it in their latest ‘Intelligence Report’!

Now, turning to the Spring 2019 Intelligence Report itself, on pages 20 to 27 is an eight page article – ‘Inside the Craze for KAWS’ by Eileen Kinsella – all about KAWS as a maker of good investments. About KAWS as the hot new company to invest in!

Interestingly, even the very subtitle of the KAWS article, doubles down on KAWS as more of a financial gold-weaver, than an actual talented artist – stating that the article will reveal and investigate, “How a New Jersey-born graffiti artist subverted almost every art-market norm to become a global phenomenon.”

What matters to ArtNet when judging an art objects’ meaning, is its status as an investment. One that goes up in value with time and is ‘good’, or one that goes down in value and is thus ‘bad’. In this was KAWS is a ‘good’ artist, creating ‘good’ art, because the market treats them as highly valuable.

Indeed ArtNet informs us that KAWS objects are such good investments – and by extension good art – at the moment because they increase in value exponentially, and almost immediately. How KAWS art toys, “Released (for) between $100 and $500… routinely fetch ten times as much on the resale market.”

Indeed, the article is filled with many such examples that posit KAWS art as a good investment and object of financial ‘hype’, as opposed to being actual art. With the article rattling off multiple stats, diagrams and quotes about KAWS, similar to how financial reporting discusses a new tech companies shares, collateral, saleable goods, and intellectual property.

With the article including such telling quotes as:

* “Reality star Kylie Jenner and her boyfriend Travis Scott, as well as musicians and producers Swizz Beatz and Pharrell, are known buyers of his work.”

These quotes all posit KAWS like shares in a newly hyped Silicon Valley tech company – informing the reader how much they are going up in value, how quickly, and also what important people are investing.

It is art as financial as opposed to cultural capital.

In signing off ArtNet note how KAWS is disrupting preconceived notions regarding the separation of high art / culture, and low art / culture. And with this, it must be said that ArtNet does indeed have a point. But what they fail to mention, is that just as there can be good or bad high art, there can also be good or bad low art.

Tellingly, they also fail to mention that just like any other market, the art market is susceptible to boom and bust periods – aka ‘bubbles’ – just like the financial one. And when any object of finance – such as objects by KAWS – rapidly increases in value, we must ask ourselves if it is a legitimate price, reflecting the actual value of the object; or merely just a bubble created by speculation?

Ultimately, it will be history who decides if KAWS is an actual artist like Andy Warhol, or more a producer of hyped objects like Mr. Ty Warner – the inventor of the Beanie Babies.

Similarly, it will be the financial market who decides if KAWS’ works are legitimately valued objects such as gold, or merely inflated objects of worth such as Tulips.

KAWS – Worth more than his weight in gold.

But for how long?

And for what reasons?

And is it actually good art?

Only time, and the market will tell. 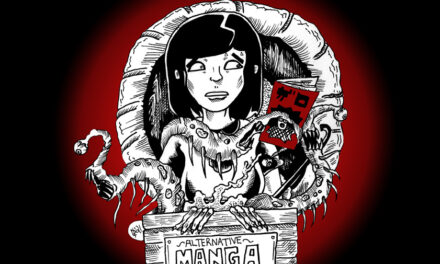 A Brief History of Alternative and Underground Manga