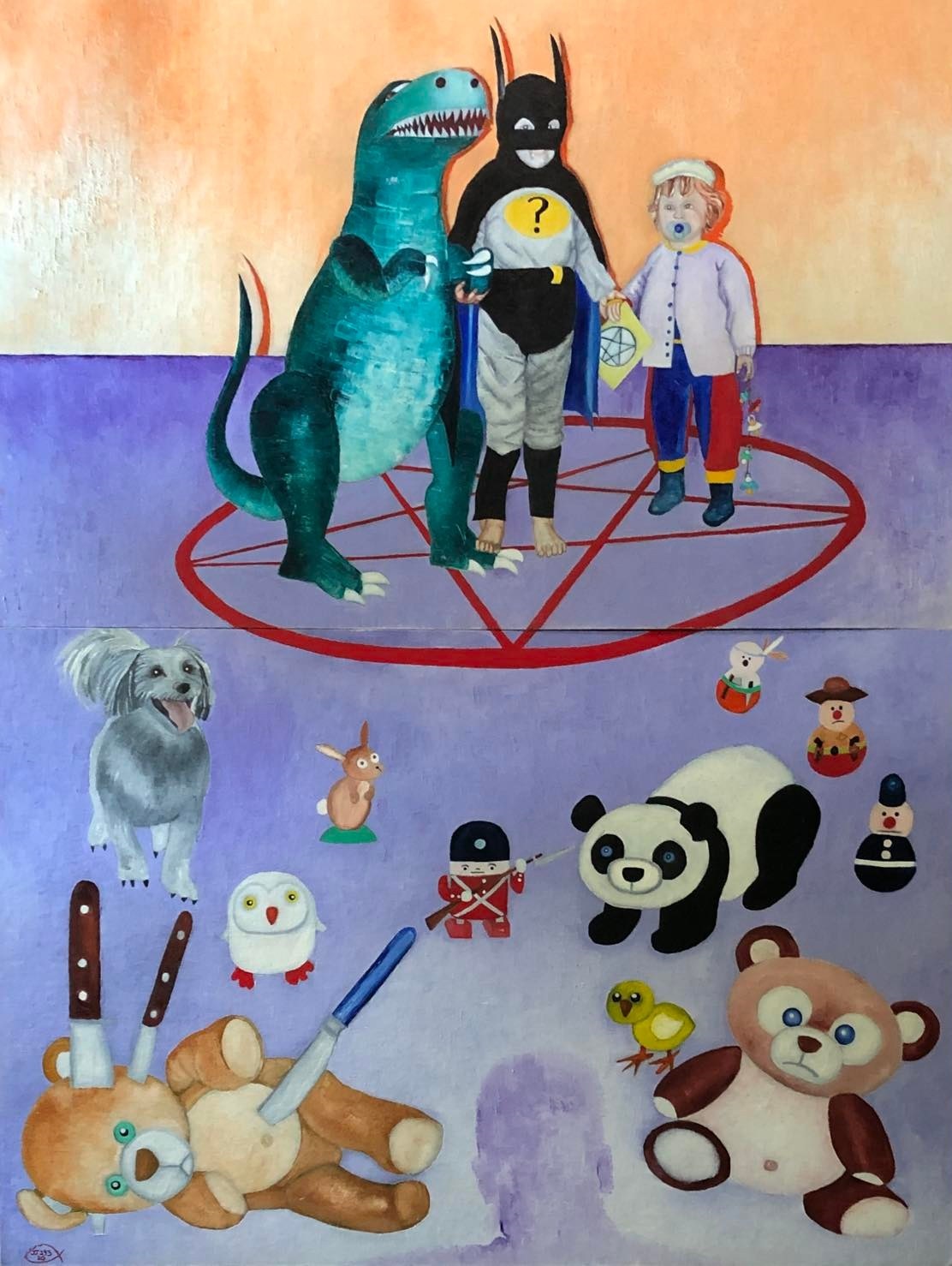 Squeak Galaxy is the nom de guerre of a British born, Australian based artist and one time musician whose paintings we absolutely adore! They are otherworldly, playful, dark and wonderfully executed.

Wanting to find out as much as we could about them, we sent Squeak some questions to answer over email.

Take a dive into their world below…

We know you would like to stay anonymous…
So, with that in mind – Please answer the biographical questions below however makes you comfortable.

Please describe some memories – such as art, comics, music, friendships, adventures, study, romance, politics, work, crime, religion… Anything really – from the stages of your life noted below:

My mother was German so living in provincial England in the 1960’s and 70’s was tough as there was still a lot of anger spilled over from WW2. I was often picked on and in fights with other kids, some of which were very nasty.

However, my home life was good and it was great living in the countryside where there were endless fields and woods to explore.

My mother died from breast cancer when I was 12 followed by my younger sister from a drug overdose when she was 20.  Both events really defined my life for many years and still influence my art.

I learnt to play guitar and sang in some local bands which was fun, became an atheist although I’m fascinated with religious mythology, dogma, corruption and corporatization.

Moved to London.
Worked in bars then a couple of record stores where I discovered dub and roots reggae which still beguiles. Particularly Yabby You, King Tubby, Earth & Stone, Bim Sherman.

Got married, hitchhiked around Europe for a few months then returned to London to find that my sister was in a really bad space hanging around junkies and thug criminals.
She overdosed soon after.
Her friends thought that she was asleep so didn’t check her until it was too late.

Continued to play/sing in bands, which became cathartic after my sister died in terms of song lyrics and assaulting audiences and generally being self-destructive.

Became a vegetarian with a growing interest in animal rights.

Still living in Sydney with 2 kids who are now both musicians.

Had to get a real job which turned out to be in the insurance industry.
It was excruciating adapting to corporate culture; however, I was able to travel extensively with work across Asia as well as Europe.

Continued to read mainly poetry, horror and speculative fiction plus tuned into comic art by Richard Corben and Simon Bisley and have collected Verotik and other titles.

Also started to draw simple cartoons which evolved into some of the examples on Instagram.

Became more interested in art particularly medieval, folk and outsider art, Indians and Persian miniatures as well as Bacon, Jean Dubuffet amongst others and started to paint sporadically with oil although many efforts were trashed.

Lived in Singapore for 5 years which was great.
Being part of another culture and in proximity to other countries.

Have continued to travel and to become more committed to art.

“Everything is transient even pain.”

It really started when I was a little kid from reading comics. Especially anything with Jack Kirby like Devil Dinosaur, Captain Victory, Kamandi then his work from the 60’s and beyond.
I loved his panoramic and galactic spreads that filled one and sometimes two pages.

This inspired me to create my own galaxy on my bedroom walls and ceiling which I painted black then added in planets as well as various creatures and characters.

I also liked Steve Ditko, Bernie Wrightson, Richard Corben and Simon Bisley plus medieval art, symbolism, Jean Dubuffet, Antonin Artaud and Francis Bacon.
However, I was more focused on music and playing in bands as a teenager and into my early 20’s so, aside from doing some posters and a crappy album cover, it was a very slow progression to actually thinking about making art.

When I started to paint more regularly it was as a form of confrontation.
To produce something that might make people think or react. Either positively or negatively.

If you had to explain your art and creative endeavours to some recently crash-landed aliens…
What would you tell them?

I have a strong sense of empathy of right and wrong which I try to incorporate into my art.
I like to question aspects of culture like religion, patriarchy, discrimination, corruption, exploitation that seem to be intrinsically and tribally embedded in society.

I try to express my ideas in bright colour or with symbolism to camouflage the message so that people may at least be intrigued enough to look.

Because my own childhood really ended when my mother died and I could see the impact on myself, my brother and sister, as the family collapsed, many of my ideas are about loss and abuse.

(2 self portraits by Squeak.)

Please describe your usual process for creating your art: From initial idea, to creation and eventual completion?

Usually, I have an outline in my head of what I want to do and this evolves as I draw and think more about it.
Sometimes I might use a photograph as a starting point if I want to draw a particular pose or expression.

I sketch in pencil or charcoal and then add paint by pressing it onto the canvas with various objects including my fingers which helps give some texture and blends colour.
I only use brushes for finer details.

Who are some of your favourite artists, musicians and writers?
…and what is it about their works that so inspire and move you?

Once upon a time I listened to Beefheart, John Zorn, avant-garde, math and noise rock as well as jazz for the intricacy and expression of the music but now I mainly play dub reggae like Tubby, Lee Perry, Yabby You, Alpha & Omega for the space and bass vibe.

But looking back I was really inspired by the visual language of Lorca, Dylan Thomas, WB Yeats’ the Celtic Twilight, Antonin Artaud which really made me think in pictures.

Musically I was blown away by the instrumentation in Beefheart songs and by the guitar playing of Rowland Howard in the Birthday Party which I still love but then it settled into dub which has everything including space to get lost and rediscover yourself.

Francis Bacon was a big inspiration for a while, mainly for colour but beyond that it’s been medieval and outsider art and the symbolism and the personal perspective this gives.
Though the beginning was Jack Kirby and maybe John Buscema.

Currently I only show my art on Instagram though I may exhibit next year.

I wouldn’t mind spending some time in Jamaica during the early/ mid 70’s so that I could get hold of dub rarities as they were released as now, they cost a fortune.

I wasn’t really into toys, more comics and books.

I had a little blue teddy bear and we were inseparable.

I remember throwing up over it one time when I was ill then I never saw it again. That was heart-breaking.

We have 2 doggies – Harry and Ziggy.

I have a first edition of Francis Bacon’s first Catalogue Raisonne which is in nice condition.

I had not heard of Auntie Jack before, however, I would think Mr Squiggle has a higher IQ and would be better prepared for a fight with his sharp pencil nose.

Usually, I don’t remember dreams though I know that I move around a lot in my sleep and sometimes appear to be lashing out with my hands or feet.

The most recent dream was that I was having an exhibition of abstract paintings. Some of which had specific text dialogue included in the art.
A lady visiting the gallery accused me of exactly copying one of her paintings. She pointed to the painting then showed me her work on her mobile phone.

That’s all I can remember.
It’s a strange dream as I have never painted abstract and as the dream was in minute detail and left me exasperated but it’s all vanished.

The most important part of my life is my wife and kids so if I am remembered for this that will be enough. 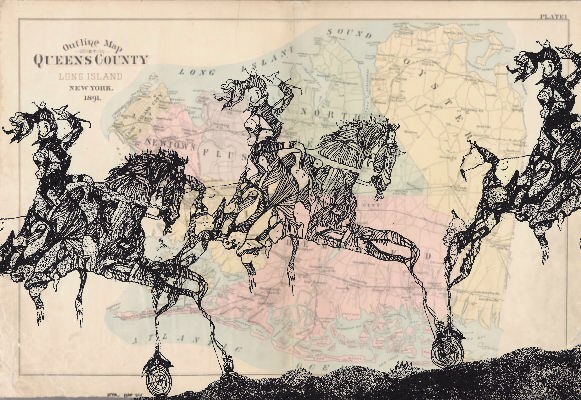 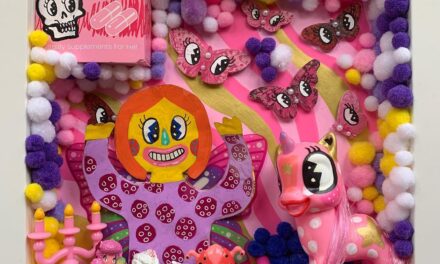 We Chat With Life Long Artist Muriel Fahrion – One Of the Key, Original Designers of Strawberry Shortcake, Care Bears and The Get Along Gang.