Fernando Rijpkema is a Dutch designer and artist who has been releasing 3D sculpted and printed figures under the name Plastic Polygon since 2016 or so.

Originally created in late 2017 Zio is unlike Fernando’s other works – as it combines both the human form, with geometric shapes.

Like all his figures Zio was designed and printed in the Netherlands.

Fernando told us that Zio was originally intended to form part of a trio of figures mixing both the human form and geometry – however only one has so far been produced.

You gaze back at your ship, still warm and gently humming after a successful landing at another intergalactic space-port. Unsure of the local time, but are all too aware that you have been working 11 hours now, and this makes delivery 12 for the shift.

You glance at your package and check the address:

Slipping your package into your backpack, you start walking out of the space-port, when something catches your eye near the exit.

You are unsure if it is a statue, or something living – but you discern that it is a voluptuous female being composed of a mixture of human, flesh coloured biological components; and machine-like, purple coloured geometric parts:

A head with no eyes that is equal parts human and robotic, a large circular right arm, coupled with a human left arm, a human torso, and buttocks; supported by a human right leg at tip-toe, and a “V” shaped, curved rod-like left leg.

Approaching the strange being you notice that it is slowly moving – circular arm spinning, breasts heaving with head turning 360 degrees as it seemingly scans its surrounds.

Arriving at the base of the figure, you crane your neck and gaze upwards in awe, and immediately notice the large gateway that exists between the creature’s thighs…

As your brain attempts to take in what you are seeing, you suddenly begin to feel weightless and notice that you are being pulled into the immense being’s gateway by some kind of tractor beam.

Suddenly it dawns upon you – the strange creature wasn’t blocking the exit – it IS the exit.

To where exactly, you do not know…

Obviously female due to its large breasts, visible vulva and ample bottom, Zio is a beautifully sculpted mixture of human and geometric shapes: a human left arm, a geometric right, a human right leg, a geometric left, an entirely human torso, topped with a head equal parts human (the chin up to the mouth) and geometric (from the mouth up).

The lack of eyes, use of geometric components, all coupled with the inclusion of human components – including reproductive parts such as breasts and vulva / vagina – adds an obvious bionic aspect to the figure. Linking Zio both with the future as imagined today, in 2019; and also the futures imagined in the past, as in the early 20th century European artistic movement of Futurism, and the associated film work of Russian Soviets such as Yakov Protazanov and his 1924 Sci-Fi film ‘Aelita‘.

The figure is composed of raw 3D printed hard white plastic, aside from a small purple plastic peg used to attach the head to the body.

Sadly we don’t know much about the plastic used in 3D printing, and thus can’t comment much about it. With that said, we are curious as to the long-term archival stability of the figure, and what exactly will happen to the plastic used to make it over time. Will it crumble? Become brittle and highly susceptible to breakage? Or will it last? Only time will tell.

Importantly, as Zio exists as a 3D sculpt – it can be produced in any medium you can think of; and personally, whilst we love it in toy / plastic form we’d love to see it cast in bronze like a classic high-art sculpture / neo-pagan idol!

Nothing – reflecting the figure’s status as a piece of pure, cold, modern, high-tech industry.

Fairly minimal – purple paint for the geometric components, flesh paint for the human, and a darker skin tone for the highlights on the lips, areola, and labia.

A simple use of colours that really makes the figure pop, and helps to highlight the duality of the figures’ human, and robotic components.

* Can it Stand = Yes
* Can it Sit = No
* Can it Be Placed Level on A Flat Surface = Yes
* Is it Easily Breakable = Not really.
The 3D printed plastic is hollow and quite durable. However, the figure’s fingers on the left hand could be snapped off quite easily – due to being thin and long.
* Accessories = None.

More sculpture than toy, Zio does have the ability to be moved and played with thanks to pegs in the arms, legs and head. However, the movement available is fairly limited.

Our Zio came packaged much like a modern computer – in a box, wrapped nicely in bubble wrap, with foam to prevent damage during transport.

Efficient and simple. All function, no form.

Yes, the figure has flaws – namely the visible lines formed during each layer of the 3D printing process, and a lack of fine sculptural detail – but it is key to note that the flaws are inherent to the current status of 3D sculpting and printing technology. Simply put – it isn’t at a stage yet were perfect objects, with fine detail can be easily produced.

So just like it would be unfair to expect a baby to be able to carry out the same actions as an adult, we must note that 3D sculpting and production just isn’t at a level yet were it can produce flawless objects.

But it will get there eventually – just as babies will eventually grow to become adults.

Zio is a perfect representation of the current zeitgeist – both technologically and designer toy wise:

A designer toy that sits at the very forefront of our current technological abilities due to being 3D sculpted, and also 3D printed.

A 3D sculpted and printed figure, that aesthetically blends the human with the industrial – the biological with the technological.

A visual metaphor for the meeting of human hand with computer hardware and software that occurs in the act of 3D sculpting and production.

A symbol of humanities’ ever-increasing ability to transform our physicality through technology.

Zio is absolutely amazing and unlike any toy we have ever seen before!

Fernando and ‘Plastic Polygon’ – we tip our hat!

It is important to note that 3D sculpting and printing technology represents death just as much as new beginnings.

For whilst 3D sculpting and production is only taking its initial baby steps, it won’t be long now till the technology improves to such a level that we will all have the ability to produce any item we can desire at home, ourselves – much like the Replicator’s in Star Trek.

And when we reach that stage – it is a given that our very understanding of designer toys, and by extension all art will change in ways we can’t even fathom… 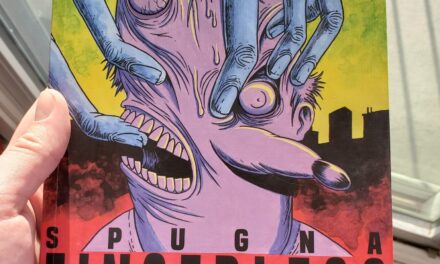