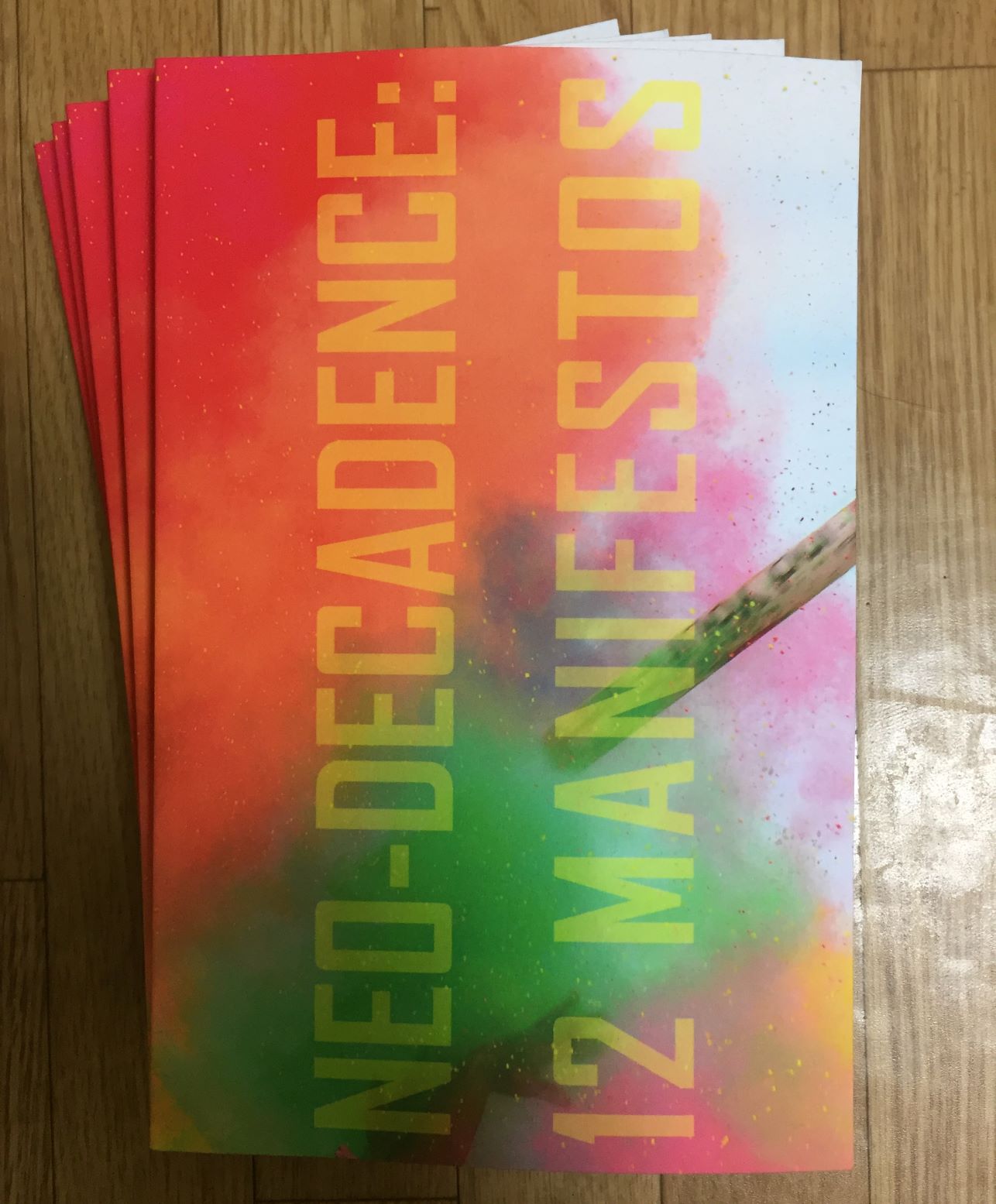 “The early 21st Century: a gilded age of pious guilt, poison nostalgia, environmental collapse, unchecked pandemics, corporate franchises, workshopped creativity and personal brands.
Standing against the Neo-Passéist tide, Neo-Decadence presents a total reformulation of everyday life. What is the vertical table? Why is a sex helmet indispensable for all assignations? What is the proper spirit of electronic gaming?
Covering fashion, cooking, architecture, occultism, poetry, gardening, and other areas of concern to all young people, the present volume is the ONLY resource for those wishing to shrug off the cerements of late capitalist literature and art.
If you’ve ever wanted to proudly commit commercial suicide while serving your own head on a plate as an offering to your inner daemon, consult this collection of manifestos—as much a personal style guide as it is a declaration of uncompromising aesthetic war.”
– From the book’s blurb.

The Neo-Decadent movement is something that I am coming to as an admitted outsider, finding the culture and discourse fascinating but lacking a deeper understanding to feel directly involved.
As an answer to that very issue, the movement’s latest book ‘Neo-Decadence: 12 Manifestos’ – edited by Justin Isis – brings together various research and revelations from some key players in the the movement.

In taking a comprehensive approach, one of the more notable reflections of the work is its fluctuations between practicality and the fantastical. Notably, elements that can be embarked upon with little effort are also presented along with ones requiring grandiose planning.
A prime example of the latter comes from the chapter on architecture, which asks for a more open interpretation of space that does not reflect practicality – such as rooms that can’t be inhabited and staircases going nowhere. While these sentiments are not beyond possibility or disagreeable, the Neo-Decadent house is much further removed from reality than other aspects addressed within.

Respectfully, Neo-Decadence is the only 21st century artistic movement to release a comprehensive document that expounds on many facets of life and existence – to that end addressing projects such as the Neo-Decedent home is key in its legitimacy instead of merely indulging in empty platitudes for the sake of ego.

Overall, the broad scope covered in the book will make certain chapters resonate more than others. This appears to be understood by the authors, with the opening section on fashion, by Justin Isis and Gaurav Monga, presenting issues that can be easily adapted – building comfort to allow the reader to move into the more challenging ideology.

On a personal note, there are certain segments of the book that I particularly fell in love with and devoured with relish. Such as the chapter on Immaterialism, by Quentin S. Crisp,  which resonated some of my own previously held views.
The chapter on occultism, by Damian Murphy, was also wonderfully insightful and approachable for myself having an, admittedly, shallow understanding of the subject.
Visually, the chapter on American Poetry by Paul Cunningham has a wondrous flow befitting of the subject.

Adversely, as someone who has always defined themselves by their interests in the arts, I found the segments on both music and video games to be less agreeable to my perceptions. However, These segments are not without merit, and me interjecting my personality into the work is less about denouncing something I disagree with and more about conveying how different readers’ experiences will vary.

The book itself is masterfully edited, making the project feel like a true collective effort of people on a similar wavelength, instead of a random assortment of eccentrics. The flow and layout is handled in such a way that it could be mistaken for the work of one individual – Not to downplay individual contributions, as each segment carries its own charm as the writer(s) explore their area(s) of expertise.

The release is also punctuated by lovely wordplay – sometimes playful, at other times absurd. The language used compliments the ideas presented in the book; with the language and ideology being interconnected in an entertaining and insightful way. This playfulness imbues the work with an excitement for the various art that will come from the Neo-Decadence movement – a movement seeking to break free of the mundanity and censorship that has made much of modern media, art and culture completely devoid of value.

‘Neo-Decadence: 12 Manifestos’ is filled with divine and occult wisdom, presenting an alternative existence that is easy to romanticize but may prove difficult in practice. However, even in a work that speaks in terms of absolutes, the release contains segments and statements that will resonate with many.
As a form of entertainment, its deviously delightful wordplay and the strong direction of Justin Isis makes the book as entertaining as it is insightful.

Results will vary, but the release pushes to address all aspects of existence and creates a deeply engaging world in the process.

Personal growth and empowerment, even in small batches is always a worthy endeavor and ’12 Manifestos’ will certainly offer just that.

P.S: I have included a few of my favorite quotes from the book below to provide a taste:

WOMEN’s FASHION – Clause 14.
Notions of age progression and “appropriateness” must be abolished: older women, still vital, must not take on drab and restrained tones, while younger women should avoid slipping into the “elegant” lassitude of clichéd “classics,” relying on mere youth to stand in for real style. Each year of a woman’s life presents nearly limitless entry points into expressive potential.

IMMATERIALISM – Clause 13.
Is it, in fact, strangeness that the materialist fears? Contemporary philosophical discourse, which strives towards an elusive materialism as towards a rainbow’s end, is replete with references to the ‘spooky’, meaning anything that cannot easily be explained within the materialist rubric. Do they want a universe entirely devoid of spookiness? What could this mean?
As Lafcadio Hearn observes, even science turns us into “ghosts of ourselves”. Do they wish to sit in the drabbest of roadside cafes eating the drabbest of sandwiches? Would that reassure them? But even a sandwich can be spooky. Jack Kerouac hints at this with his concept of the naked lunch moment: “a frozen moment when everyone sees what is on the end of every fork.” Or, in this case, the moment you really taste the entity that fills your sandwich.

OCCULTISM – Clause 3.
Our holy books will be legion and of staggering variety: instruction booklets for console games that never reached the market, infomercials for sketchy investments recorded onto Betamax cassettes, wallpaper motifs culled from 1960s Belgian catalogs, and blueprints drafted by architects whose ambitions eclipsed their means.
In these ephemeral relics can be found the gates to hidden palaces of initiatory splendor. One needs only be so clever as to find the means of ingress.

ARCHITECTURE – Clause 5.
The Neo-Decadent Architect understands that interior decor must be pleasing to the eye, and all other senses, in disparate combinations of the beautiful and grotesque. One’s living space should resemble one’s psyche splayed out on the walls, just as the heavily-tattooed body serves as a living house of flesh and bone.

AGAINST NEO-PASSEISM – Clause 3.7.
The Neo-Passéist’s concealed, puritan disgust for language implies a prophylactic approach to writing; words must be kept at arm’s length, not given too much importance. The literary Neo-Passéist, despite their professed debt to the written works of the past, feels more at home with the reassuring cleanliness of moving images and their controlled tempos. The internal construction capabilities of language are seen as suggestive, treacherous, gratuitous: ever present is the fear that language might escape from its subordinate position of “representing” a recognizable social field, or be used by well-versed adepts to fracture reality itself.
Neo-Passéists are terrified to admit that language exists in the same way their physical bodies exist: this fear prevents them from being poets, or feeling deeply beyond a thin scum of anxiety and its corresponding need for validation. But for the Neo-Decadent poet, language, produced inside the body like a spider’s gleaming strands, forms both their weapon and their home.