In the late 1990s, it was not uncommon for fictions on mainstream to reflect a strong religiosity, I imagine. Please remember the notorious prophecy of Nostradamus was at hand. In addition to it, doomsday cult, Aum Shinrikyo was being shown up in the mainstream media in Japan.
Looking back on those days after knowing of their mad incidents, the fervour was really strange.

Japan has no state religion, but the Japanese society shares religion-like mood through the end of the 20th century with excitement of many revolutionary topics (Windows 95, Sony’s Playstation, Aum etc.)
I won’t talk about Neon Genesis Evangelion. Instead, talk about a Japanese video game released around the same time – Linda³ (Linda³ is read “Linda Cube”) was originally released 1995 as a title of TurboGrafx-16, only 7 months after Aum’s gas attacks.
2 years after, the game is reworked and named Linda³ Again to Playstation.

Fictions were written in end of the century tend to depict protagonists who deny God and attempt to deviate from the circulation. Not so unusual that they often used a phrase like “overcome your destiny.”
As zombies can be played effectively as a metaphor of supernatural disaster or racism, the collapse of the world can also be used as any themes. I can say that it is like a mirror reflecting your emotions in the face of collapse of the world, but in Linda³, there is no struggle to save the world from its collapse. Instead of that, Linda³ describes living that bases on acceptance of such things as circulation and absolutely rule.
It tells that humanity have not been to cast away its instinct to preservation of species in the history.

The plot is set in a planet called Neo-Kenya. Once upon a time, the humanity from the Earth moved to the planet. Indigenous beliefs are alive and the folklore of the planetary natives, called Beastian. Their belief is an important thing on the whole of scenarios.

The dense bizarre of stories and game designs were powered by Shoji Masuda. He was aware of the perspective that some things are rooted in people’s unconscious and elicit the same emotions in all ages.

Shortly after the Linda³ published, Masuda revealed the fount of the game on the developer’s website. According to him, it was inspired by a book, which he explained “all the legends and fairy tales of Europe are categorized according to scenario patterns”. (Maybe Aarne-Thompson type index or James George Fazer’s The Golden Bough.)
Initially, the idea for Linda³ came as a reaction to Far East of Eden II Manji Maru, which Masuda and future staffs of Linda³ had been working on full-time. It is a typical RPG in which the righteous defeat the wicked.
Masuda and folks tired of this usual, so they came up with a small-scale storyline. It was about a man who runs a zoo in the space, he makes into a spectacle by rare animals. The game was tentatively called ‘Zoo of Heaven’. Masuda then found the plot is similar to Noah’s Ark. Did it make him catch the mood of “catastrophic” the 1990s? In Linda³, the flood of Noah’s Ark was replaced to a falling meteor, it destroys all of the planet. The idea is sounded very instinctive to people, especially in the mid or late 90s.

But Masuda was drawn in the direction of Eros, it means the strength of life in front of doomsday. Because he was falling in love with his first child at that time. Besides that, he respected again his wife who gave birth to the baby.
Linda³’s two famous scenarios, A and B, in which parent-sibling bonding and love spin out of control and head towards destruction, are the flip side of love.
When both of them lead you to the scenario C, you can understand what I said.

Once again, I write the plot of Linda³. A meteorite was on the way to Neo-Kenya was found. The meteor is came to be called as Death because it will definitely hit and destroy all of the planet. So, the people who live in Neo-Kenya began evacuating to another planet. Then, a mysterious stone monolith and a huge Ark suddenly fell down on the ground.
The monolith has the message from God, he tells that the instructions to put a pair of all kinds of animals into the Ark and set off for another planet before the planet is destroyed. Ken Challenger, a member of a ranger organization, runs for the Ark’s crew to follow his childhood friend Linda Burning. The two have to collect as many animals as they can before the planet collapses, it means that they will be new Adam and Eve.

The Ark is clearly a product of over technology, but the reason why it was brought before Neo-Kenya people’s eyes is not revealed in great detail. You can find who sent the Ark in the ending of the “true” scenario C, but not find why the one got the right.
Not little people in Neo-Kenya accept the Ark as a divine guidance because it is in the shape of the Ark described in the Bible. Whether you believe in Jesus or not, you cannot essentially forget the idea itself.

The logic is similar to the one topic of Xenogears (1998 Square). An important character of the game, Karelian, a brutal atheist, sets a plan to release all humanity from body which as the Gnostic cage. He named it Project Noar; his ultimate goal is a kind of ascension.

At the last of all scenarios, an big bang symbolizes a death and a new birth. Even though an end has come, a beginning sprouts up somewhere. Instead of the destruction of the circulation as in another title, Xenogears, Linda³ proves its significance in the creation of that circle of life by itself.
It was summarized that humanity sow seeds at the time to start over from scratch for the further future.

(An animation sequence from Linda³.)

Although the worldview looks like biological steampunk in the vein of AKIRA, in which the character designer of Linda³, Cannabis also participated, the game does not identify itself as cyberpunk or psychic action.
In the remake version, Again, the graphics (mainly sprites) have also been deliberately kept simple to ensure compatibility with the game system. This is in contrast to Final Fantasy 7, which came out in the same year and appealed its full polygonal movies. This seems to be like a dejavu of the positioning of Masuda and his team when they were making Manji Maru 2.

To all characters’ facial graphics, you would mistaken for an aesthetic use of minimalism or obsession to good old pixel arts by accustomed to over direction and saturated data in these days. Also, the character voices, which only play at some turning points are good effects to the scenarios. Of course, they were the reason of capacity at the time.

Nature that originally designed by the planet, such as the changing seasons of a planet or the intense visuals of animals, are more memorable than the landmarks of civilization, like factories and tunnels. It seems to imply that humanity can’t forget its instinctive pre-technological memories.
Many shops where you visit, such as auctions, dogfighting and demolition shops, are rarely seen in other games, and these have a reverse reality. It is one of the Linda³’s black joke, there are many businesses undermine the relative value of animals. As it is, the world we live as well.

The words/lines that appear in the scenarios connect/relate to each other in an Aspergerian way. A word/line of one scenario can mean the opposite of another scenario.
There is a lot of rhetorical dialogue, they depend on the uniqueness of the Japanese writing system. It forces the reader to read what is not written in the text, and even the hints of forward in a game are no exception. This is probably one reason why it has not been officially localized to foreign language-speaking countries.

(Some in game-screenshots from Linda³.)

“If only I had chosen the other one at that time”.
When you imagine the decision what you would not have taken, it is one of the pleasures of RPG. Linda³ even makes you aware of the NPC characters’ “choices” by the different scenarios. This meta-construction is what makes the story of Linda³ both funny and lonely at the same time. “Lonely” is not meant to be negative here. It is a moment of release of one’s own emotions, similar to the one that the word ‘fun’ misses, like when you have a déjà vu.

Linda³ praises the ambiguous catharsis that you do sometimes such as smiling to your love or crying out against a painful in your life. Linda or Sachiko (who is a main personal of a scenario) themselves are distorted jugs which the water called emotion poured over.

In the 1980s Japanese animation world, more and more anime titles were released only on video or in theatres to draw bed scenes and gore. When I heard of the topic, I always remember Linda³ was released on the TurboGrafx-16.
Back in the days (the mid of 1990s), when there were no age-restriction regulations such as ‘CERO’ (Computer Entertainment Rating Organization). The market of TurboGrafx-16 had been loosely enforced (compared to today) sexual or brutal depictions. However, Linda³ did not use eroticism to accentuate the ‘adult-oriented’ nature of the game at face value. They are used as metaphors for the very thing they want to portray in a tightly written all scenarios. This is despite the fact that they are depicted in only a few scenes.

Tips: Linda³ is the first title in Japan to be added the red triangle symbol, which warns about violent expressions. The original TurboGrafx-16 version was also assessed as “don’t play under 18 years old”.

(An animation sequence from Linda³ – Featuring Ken’s brother, Nek shaped by dreams about “not existed brother” of Shoji Masuda.)

Just as eros is described figurative, death and injuring itself are also presented without compromise. Cruelty does not rise above spice, but the slightly changed points of the scenario of the original, and the beautiful animation (made from cel) by the reduced resolution for the packaging to CD-ROM, combine to create a dark and haunted mood.
Some of animation movie will interest the viewer who watched a partially clipped video on the Internet.

As I wrote before, this worship-like womanhood, which also embraces motherhood, was born out of Masuda’s respect for his wife (as one mother) and love for his child. His Pagan-tic worldview, which looks like ‘two’ divinities – male gods and female gods – and acknowledges that the universe is made up of a pair of different beings.
By the way, Linda ³ Again was released at the same time with Ghibli’s Princess Mononoke, and the commercial of the game aired on then cinema ads. The two Pagan-tic stuffs are somewhat similar.

The icon of the view in Linda³ is a family. In a time when typical family images are used to reinforce patriarchy and antinatalism is gradually widespread as a way of think, the messages expressed in Linda³ have to be seemed old-fashioned in every sense of the word.
Of course, I mean it makes the game become accentuate at the same time.

I can feel the two oppositional feelings from Linda³. The one is very conservative view, and the other is the cynically agree with the 60’s ideal for “live and let live”.

Yu Hirayama is a Japanese artist, writer, publisher and record label owner. He is also the founder of FEECO Magazine and Suikazura Records. 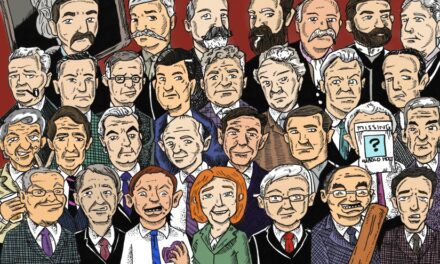 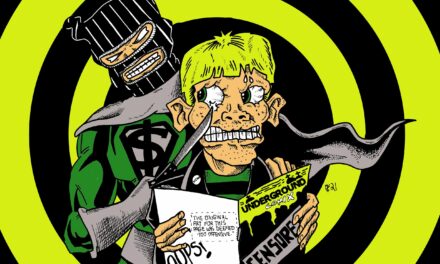 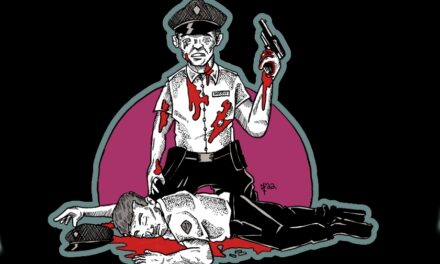 Cop Shoot Cop and the Poetics of Confrontation 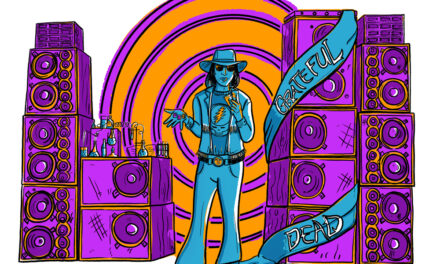