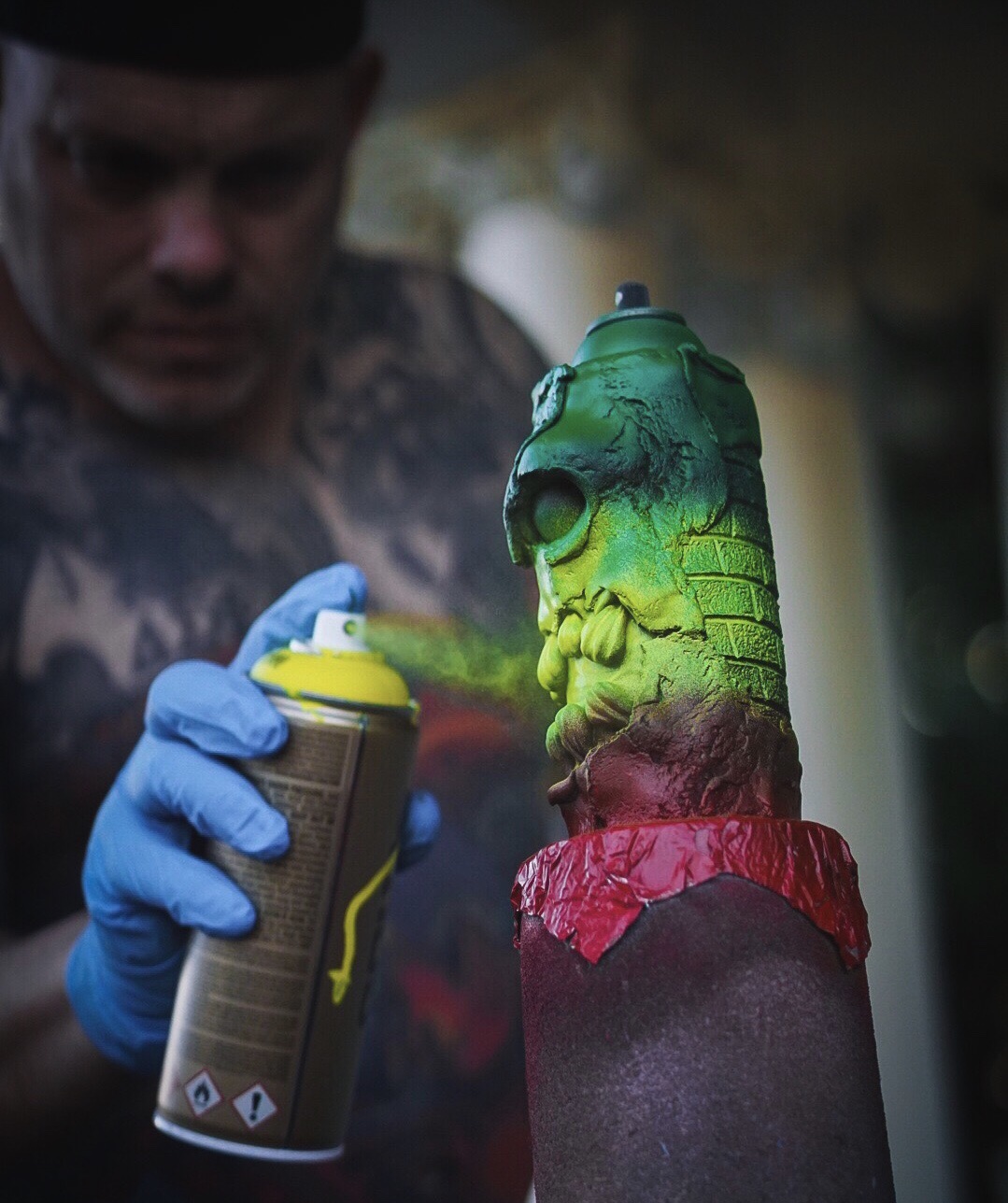 Colin Hoffman aka Big C is an American artist, sculptor, poet, designer, toy maker and the creator of the ‘Baby Fatts’ character.

Growing up in San Francisco in the late 1980s and early 1990s, C fell in love with the hip hop scene as a teen due to his passion for poetry, lyricism and beats. Then, fast-forwarding a few decades to the late 2000s, C discovered the vibrant designer toy scene, first as a fan, then later as an artist.
From there it wasn’t long until C found himself turning his art and custom skills to a pivotal object of his youth and the hip hop movement – the spray can. A utilitarian object used to create the graffiti central to hip hop, and one of it’s 4 core elements (along with rapping / MC-ing, DJing, and dancing / B-Boying.)
With the curved surfaces of spray cans becoming a canvas for C to turn his talents to – re-purposing old, discarded spray cans into Killer Cans such as monsters, skulls, beasts and pop-culture characters.

With C’s use of the spray can referencing the energy of hip hop, his love for re-using and re-framing the detritus of capitalism, as well as the power and strength that can be found within us all through embracing our inner self.
As C’ states:

“My intention is really to convey the message of acceptance of self and of others, and then the next step.
Just like my children’s book ‘Baby Fatts: The World’s First Dragon’, celebrate differences, they are what make us special.“

After creating his Killer Cans for a few years, now C has teamed up with the ‘Plastic and Heroes’ designer toy gallery and shop to host his debut solo exhibition – the ‘Killer Cans Freak Show’.

Having last spoken with C back in March of 2019 we thought it would be a good time to catch up with Colin and also ask him a few questions about his upcoming solo show – which you can read, below:

How have you been since we last caught up back in March 2019?
…and any major news / life events you want to share?

The first interview we did touched a nerve for a lot of people (in a good way). People have entered and left my life, but still single and still a dad. ?

Beyond that, I have many projects and shows planned throughout 2021.
The next one is my solo show at ‘Plastic and Heroes’.

I’m finally making now work, after all of these years. But other than now, I’d love to see the future.
To see if this Colin guy did anything significant with his art. With his life. See if the world survived.

I’m done living in the past.

What do you do for a day job at the moment?
… and how does your day job impact / influence your art and creative life?﻿

My art is my day job.
I’m blessed with the freedom to create as I please.

If you were trying to hype your upcoming show to some recently crash-landed aliens. What would your pitch be?

In my Freak Show, we are all welcome and we all belong, including the crash-landed aliens.
As long as they were peaceful.

As far as my pitch, come see some amazing art – Each piece is an upcycled empty spraycan, hence the phrase, “Buy a Killer Can, Save the World.”

I’ve really thought outside of the box with the pieces for this show – Some have very different sculpts. For some of them, I experimented with different colors and paint schemes. On some I did both.

My intention is really to convey the message of acceptance of self and of others, and then the next step. Just like my children’s book ‘Baby Fatts: The World’s First Dragon’, celebrate differences, they are what make us special.

I’ve been working on this show, my first ever solo show, for the better part of 8 months. I started working on one of the pieces over a year ago. She had to sit there naked, for months, as I figured out how to paint her. Another of the pieces took over 20 hours of work (5 x the typical time for a can.)

How did you and ‘Plastic and Heroes’ come to make the connect anyhow?

I don’t remember how we first met, but I think it was at the first Silicon Valley Comic Con. I participated in each of their previous shows, and we’ve discussed many projects over the years.

I actually wrote out my book, in their office.
‘Plastic and Heroes’ have been very supportive of my work.

What advice would you give to young / burgeoning artists about the experience of having their debut art show?

Stay true to yourself. Be humble and always look for ways to improve.
Keep a strong tight circle. Respect those who have been doing it.
Never burn bridges. ALWAYS show respect.

Create every piece as if it was your showcase piece.

Oh, and did I mention respect? Seriously, respect means a lot to me. I truly hope that I’ve shown appropriate respect to my peers and to the community.

What does the humble spray can mean to you anyhow man?
We ask as you are using it as a custom platform, but it’s also an object of design, a utilitarian tool for applying paint, a key component of hip-hop / graffiti culture, and also a damn fun tool for pyromania (when combined with a flame.)

I seriously laughed out loud at the pyromania part. I’ve always liked to sculpt on different things – I once bought a juice bottle, because I love its shape & wanted to sculpt on it.
Thankfully my kids loved the flavor.

As far as spraycans, I start and finish all of my pieces with spraycans – The primer, the basecoat and the clear coat are all spray cans. Any fades you see, or sometimes don’t see, on my work are all with spray cans.
I don’t own an airbrush.

I’ve never been a prolific writer, but I may have been involved in the scene in other ways. I’ve been a fan of the hip hop culture, since I was a young kid.
I grew up in the bay area streets.
I was the world’s worst breakdancer in middle school.
I’ve thought of myself as a poet since I knew how to write.
I remember the first time I heard Planet Rock. I was hooked.
I’m not going to go through a hip hop journey here, but it’s safe to say that much of my life was heavily influenced by the culture. Working with spraycans makes me feel connected still. Maybe makes me feel young. I dunno…

I adore spraycans, and respect the amazing artists who use them. 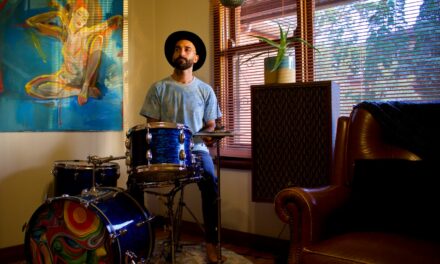 We Chat With Frank Attard, One of the Founder’s Of Pepper Shaker Records, Music Producer And Member of Bands ‘Frozen Planet… 1969’, ‘Mother Mars’, ‘Ina Maka’ and ‘Beliza’. 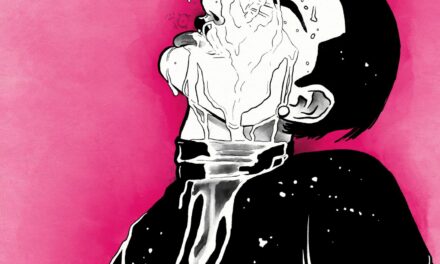 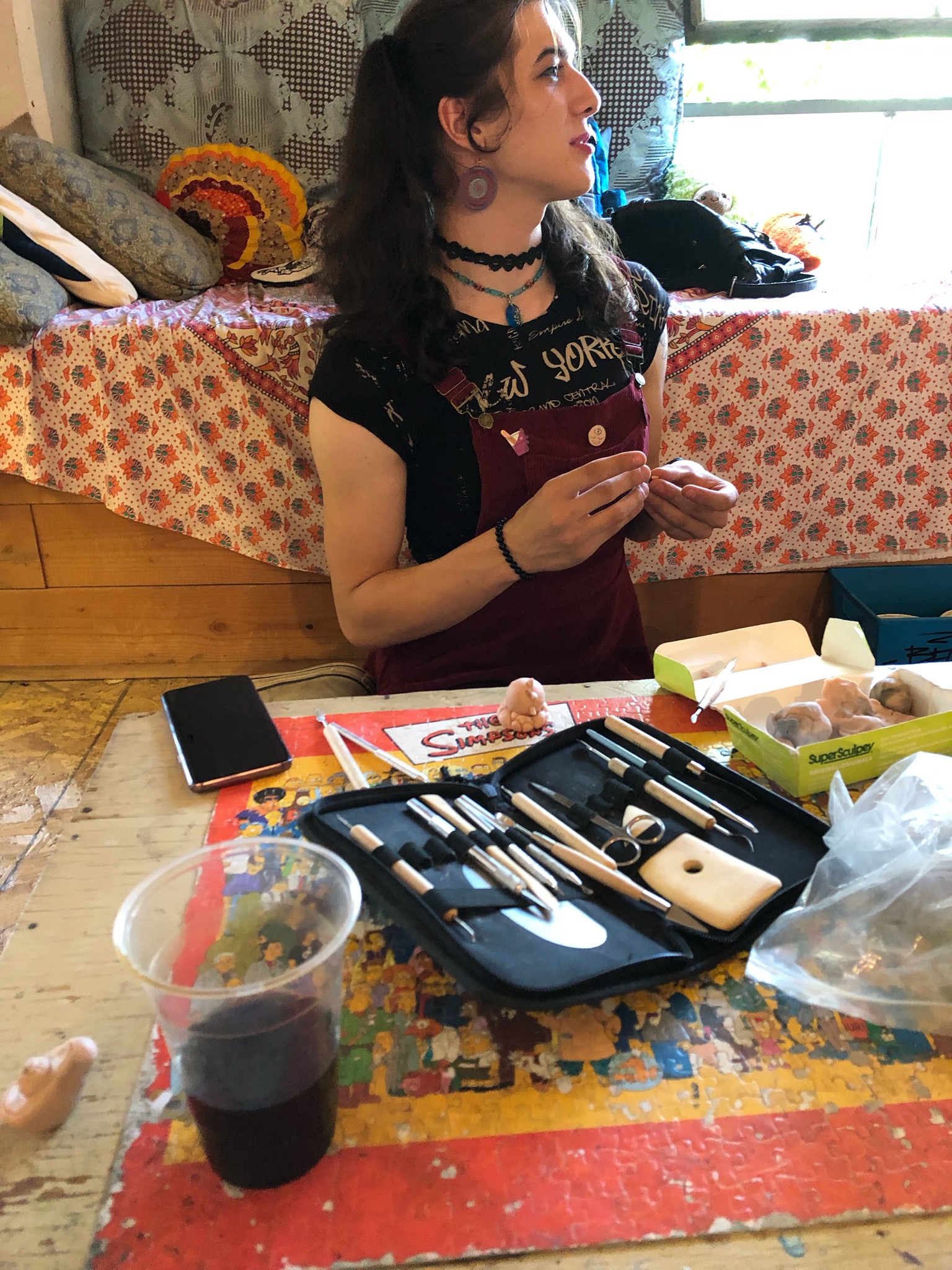 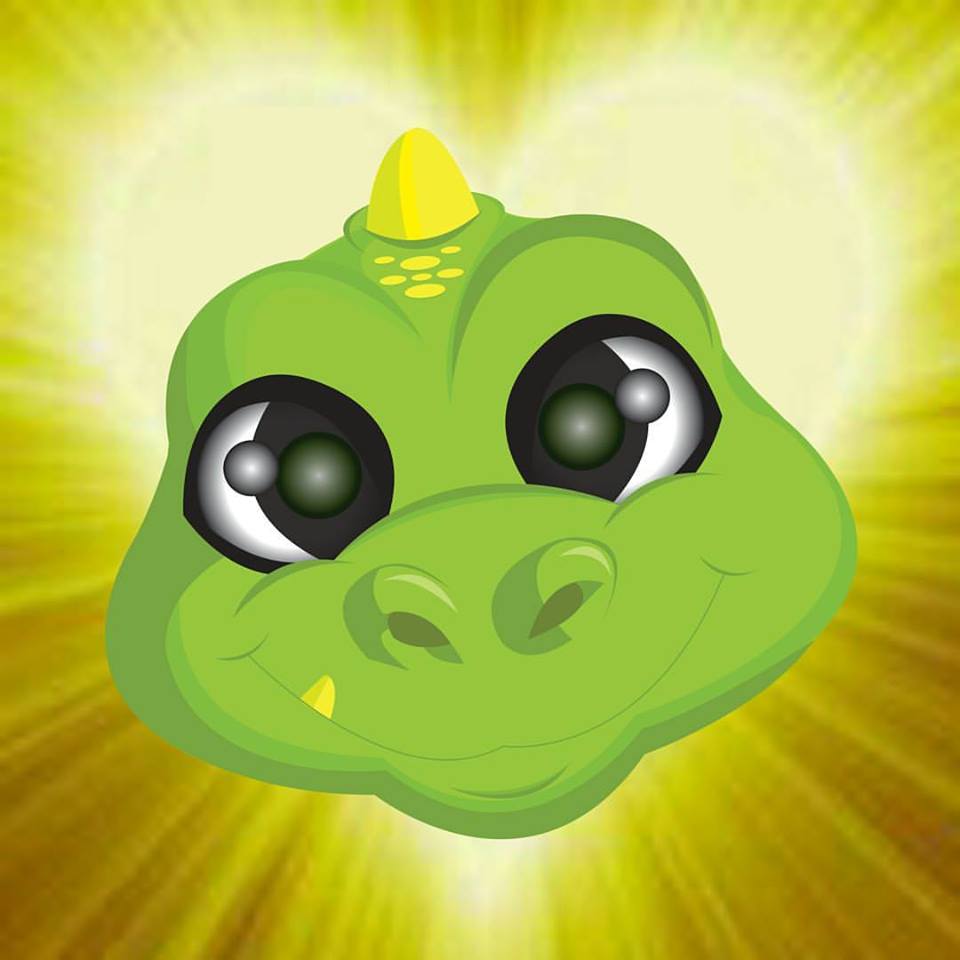 We Chat With Colin Hoffman aka Big C – Artist and Creator of ‘Baby Fatts’.